With whitetail season 2018 winding down, there have been lots of lessons learned about bowhunting Texas deer. Even though I have decades of experience hunting here, I continue to be amazed at our deer – their adaptability and especially their wariness.

Having hunting friends from all over the country, I am very aware that there is a perception that hunting whitetail over bait (corn feeders in our case) is a gimmee.

Many expressions come to mind: slam dunk, fish in a barrel. I recently even heard the comment that we need to learn to hunt them “the right way”…

Of course, everyone is entitled to their opinion, but I would assume that most have never bowhunted deer in Texas. I also would suggest that in most of the states where those comments originate from, baiting is not legal. Well, for deer that is, but you can still shoot a bear eating donuts out of a trash can that you refill every day, but I digress.

It is undeniable, that our Texas whitetail are wired. Their ability to’ string jump’ is legendary, and rightfully earned. Until I purchased a GoPro camera, I was never aware of how many of my ‘misses’ were actually right on track, but the deer rolled or ducked out of the way of the incoming arrow. It doesn’t change the end result, but you do, at least, feel somewhat vindicated! 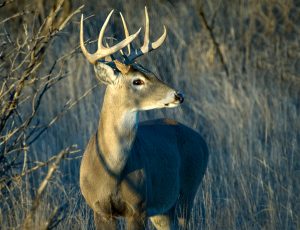 Sometimes you can even see an inherited wariness in the yearlings that have never been hunted. If it’s not in their genetics, how do you explain how terrified they are of something they have yet to be introduced to?

I think one big lesson is: we need to be intimate with our equipment, especially its limitations. If we do not feel we have every expectation that we can make the shot, of course we should pass.

Another is shot placement. Many bowhunters literally aim below the chest anticipating the drop. My hats off to those that are capable of that, but I do attempt to aim very low in the vitals.

I think the most difficult factor for me to manage though, is not to shoot at a target that is somewhat aware of my presence. As already discussed, they are almost all very wary. But I do know that, more than likely, a deer that is already super jumpy is not going to be standing in the same spot when that arrow gets there.

It takes a very ethical hunter to not force the shot in that situation, but we owe it to the deer, especially in the climate of hunting opposition that exist these days. We don’t need to do anything to make their case against us any easier.